– Six Champions Honored from Bangladesh, Egypt, Mexico, Scotland, Uganda, and the United States for their Contributions to Expanding Access to Hepatitis Prevention, Testing, and Treatment and Commitments to Hepatitis Elimination –

The Elimination Champion initiative was launched in 2019 and aims to recognize individuals’ remarkable contributions to improving political commitment, policies, and programs, which help expand access to interventions and accelerate progress toward hepatitis elimination, particularly in areas with limited resources.

“The Coalition salutes the Hepatitis Elimination Champions from six countries bound by a shared commitment to eliminating hepatitis as a health threat for their patients and communities. These Champions are committed to achieving health equity, the ultimate goal of hepatitis elimination, by fighting hepatitis-related stigma, advocating for government action and expanding access to hepatitis testing and treatment through capacity building and developing simplified models of care. Because of their actions and the example they set for others, the world is that much closer to the goals for eliminating hepatitis. Congratulations and thank you,” says Dr. John Ward, Director of the Coalition for Global Hepatitis Elimination.

The Elimination Champion 2021 nominations were opened from March 29thst to May 24thth, 2021. In all, 17 nominations were received from 15 countries. A panel of judges representing previous Elimination Champions, elimination program managers, the major liver disease professional associations, civil society, and funding organizations assessed the nominations. Champions will receive awards by mail and their profiles will be added to https://www.globalhep.org/champions. Dr. de la Torre has provided visionary leadership to Mexico’s national hepatitis C elimination program. After being asked to develop the program in 2019, she created innovative initiatives and advocated for equity to remain at the heart of the program. One of her greatest accomplishments was establishing a national electronic surveillance system and testing and treatment registry. 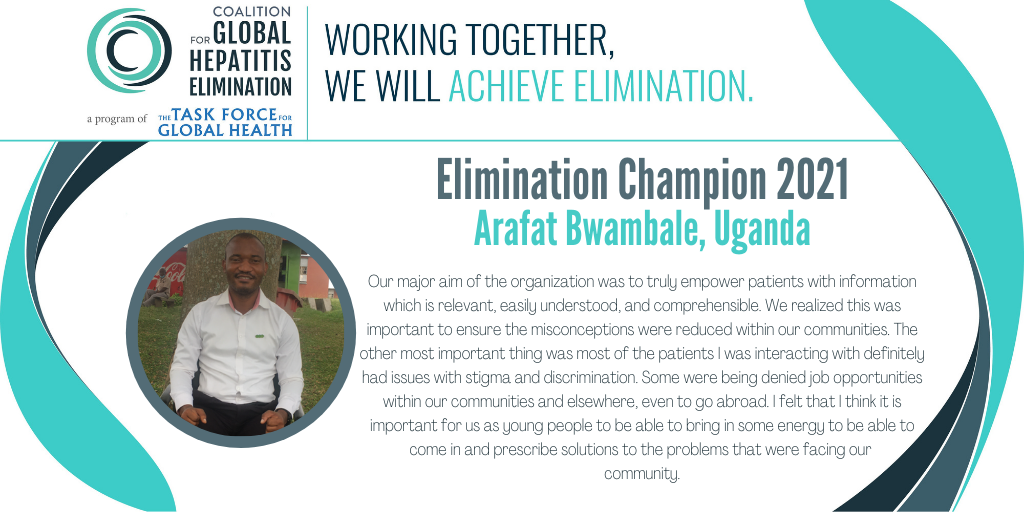 After witnessing how a lack of awareness and stigma around hepatitis B can devastate families first hand, Mr. Bwamable co-founded the Great Lakes Peace Centre (GLPC), a grass root youth led organisation in Kasese, Rwenzori Sub-Region in Western Uganda. Mr. Bwambale is an inspiration, dedicating his life to mobilizing and empowering patients and championing the fight against hepatitis B & C in the community. 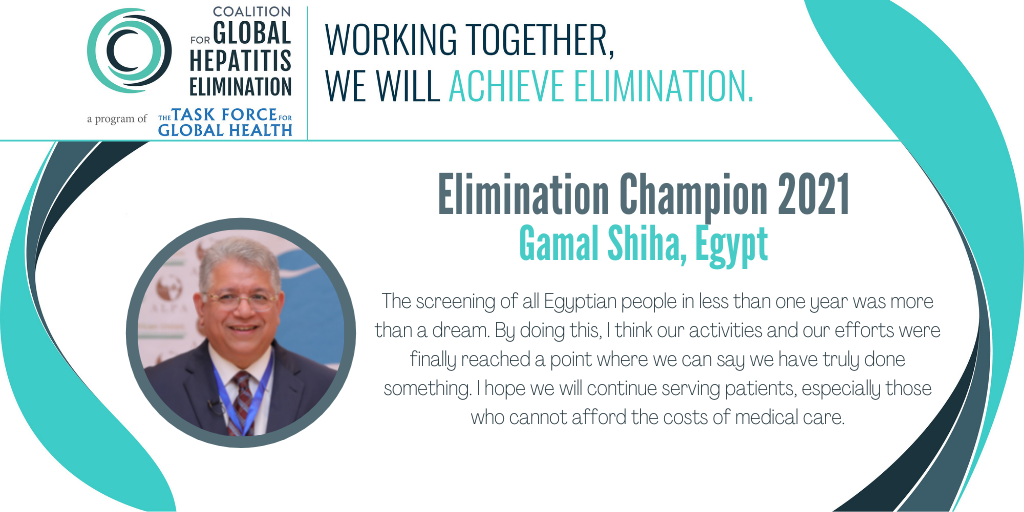 Dr. Shiha has devoted his medical career to making hepatitis treatment accessible to all Egyptians. In 1997, he created the Association for Liver Patients Care, and in 2011 he established the Egyptian Liver Research Institute and Hospital. The Hospital now treats over 50,000 hepatic patients annually. He did not stop there- he also developed a community-based hepatitis C testing and treatment model that has been implemented in 100 villages, with 250,000 villagers screened for HCV & HBV, and 16,500 infected patients receiving free treatment. 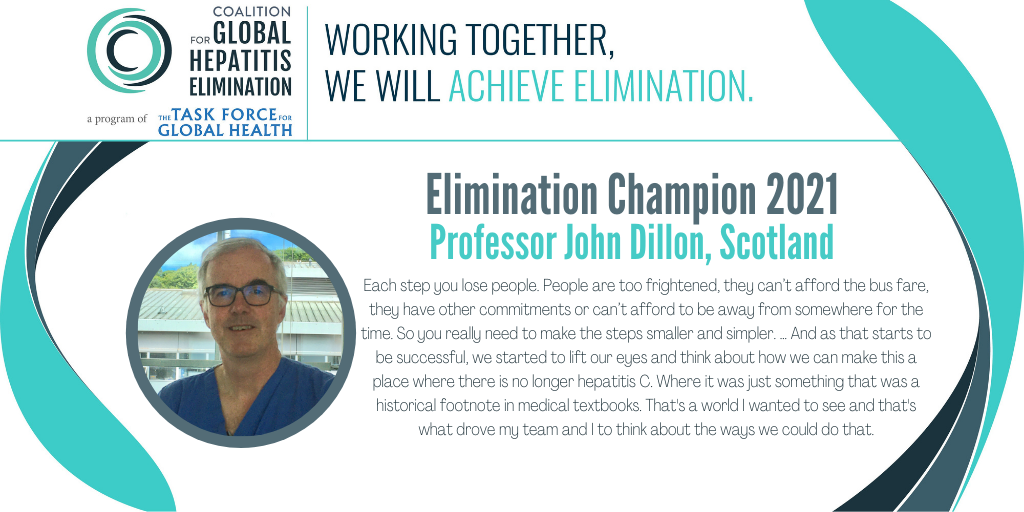 Dr. Dillon has made an impact on hepatitis C elimination both at the local and global level. In Tayside, Scotland, he established models of care to reach people where they are-through needle exchanges, pharmacies delivering opioid substitution therapy (OST), prisons, and community-based organizations. By way of his scientific studies, these models of care are now globally recognized as best practice and being translated to settings in all corners of the world. Dr. Dillon is also the lead clinician for National Health Service Scotland for Hepatitis C. Rachel Gonzalez and Dr. Park are known as the behind-the-scenes heroes that operationalized the hepatitis C elimination program in the U.S. Department of Veterans Affairs (VA). In their roles, they oversaw the Hepatic Innovation Teams (HIT) Collaborative that designed technological solutions and provided hands-on support to clinicians across the healthcare system. Their dedication led to the screening rate of veterans increasing by about 20% to more than 85% and resulted in more than 100,000 Veterans cured of hepatitis C.